Microsoft promised a first look at Dynamics 365 at today’s Dynamic User Group Summit 2016 events, and they sent the person in charge of the Dynamics product direction to make sense of it.

Microsoft has put these new offerings to work at select customers that participated in Dynamics 365’s evolution. Guthrie made his case with videos and guest speakers from (among others):

From manufacturing through sports and consumer apps, there were few repeated verticals; each appeared delighted, and each credited their use of Microsoft cloud technology, including Dynamics 365 in most cases, to drive “transformational impact.”

“Each one of you has the ability to deliver these solutions to your business,” Guthrie promised.

Guthrie displayed a graphic (see below) of Dynamics 365’s breadth of applications. Any one or several can be turned on as needed, and supposedly in minutes. 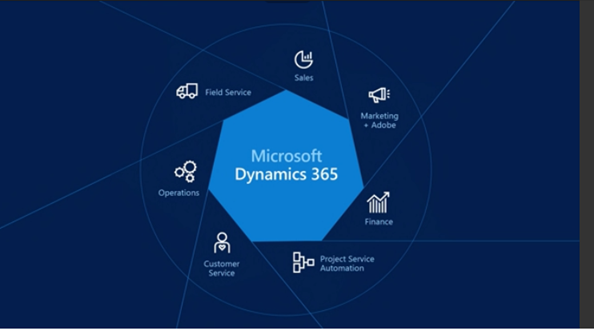 Guthrie described that Dynamics 365 integrates CRM and ERP into one service with four business benefits:

Guthrie invited Microsoft principal product manager Ryan Cunningham to the stage to show off Dynamics 365’s unified experience across applications. Using the Dynamics 365 Enterprise app suite, he revealed the new home page showing all the user’s available apps (Customer Service, Financials, Operations and Sales), and a button to click through to the AppSource Store.

And within the browser interface for each app, new navigation elements allow a user to quickly transition from one app to another, like moving from Sales to Operations.

In theory, all Microsoft and integrated solutions funnel into the Dynamics 365 shell. Guthrie introduced a video profiling AccuWeather, which uses a Microsoft stack including Dynamics 365, Office 365, Exchange and a large dose of Azure.

“It was really important to pick and choose the technologies for us,” said Accuweather’s CTO; “All the products tie well together. [It has] really transformed us, from sales to marketing, even IT,” with real-time decision making. Guthrie pointed out those decisions are made by consumers and by, for example, transportation officials in the event of disaster – multimillion-dollar real-time decisions.

Productive applications (where Office and Outlook come in)

Guthrie described companies with finite resources, for which productivity is critical for the businesses to scale. Dynamics 365, he described, makes employees and processes more productive by making it “incredibly easy to automate business processes day-to-day, and use on any device or platform.”

In particular, Microsoft has integrated Dynamics 365 with Office 365 for “immersive experiences.” Users who make Outlook their home base can operate Dynamics 365 from it (within reason). The graphic below depicts the Outlook ribbon, from which this user can launch Dynamics 365’s Sales modue.

Here, Microsoft Senior Director Marko Perisic demonstrated the “beautiful, immersive new experiences” that come from “breaking the barriers between ERP and CRM.” He asked the audience to imagine a salesperson, in the back of a taxi, using a smartphone. Using a smartphone, he opened a customer email, and from it launched the Dynamics 365 mobile sales app (see below); viewed all customer interactions and information (including a past-due balance); created a proposal in Microsoft Word; created a quote and an order. 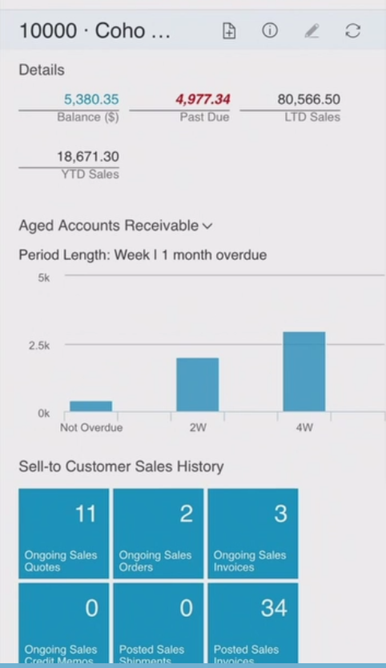 Intelligence = Cortana, with a touch of sentiment

A true transformation requires an advanced analytics platform, said Guthrie, hence Cortana is native to Dynamics 365. The idea is that with artificial intelligence (AI) capabilities of Cortana, a sales or service representative can make product recommendations, view sentiment analysis and offer preemptive customer service – all aimed at better business outcomes.

He emphasized that Dynamics 365 – and all Dynamics product to come – will use artificial intelligence (AI) in Cortana to provide the next level of insight. Microsoft CEO Satya Nadella, at the recent Ignite conference, described AI as a third historic “inflection point” of knowledge, with printing and the World Wide Web being the first and second. Nadella (and Guthrie) promised deep integration between AI and productivity tools as well (along with Power BI).

A new capability – one new for the November 1 general release – is Relationship Insights, which provides proactive personal sales assistance (see graphic). For example, the insight can alert the salesperson (or manager) that an opportunity is at risk, with no contact for 30 days. Here, the salesperson can launch that intelligence-gathering by opening a customer email and clicking a link. 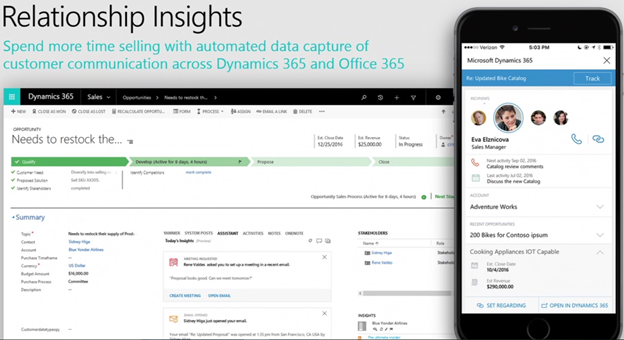 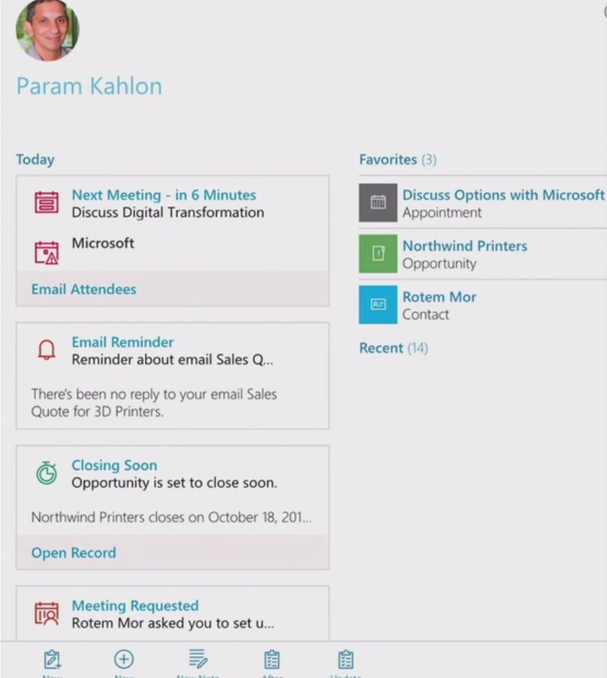 From there he clicked into a screen depicting open opportunities by relationships (below); and yes, that one in red in the lower right is in crisis. The application measures the health of each relationship by touchpoints, to be a “Poor relationship and declining” with the last interaction more than a week old. The yellow one has a relationship health below 60 and is in crisis as well. That large opportunity to the right is the highest figure and closest to close.

So the intelligence that Dynamics 365 offers includes more than customer data, but customer sentiment as well.

Here Guthrie announced a new offering, Customer Insights for Dynamics 365. The aim of it is to accelerate time to value, with a SaaS solution built on Cortana Intelligence that enables you to ingest data from any data source for a 360-degree customer view; taking advantage of machine learning algorithms.

Adaptability for any business

Between the three, Dynamics 365 is “Easily adapted to the new speed of business,” said Guthrie, noting that new business models arise in eighteen months versus the years of the past.

Microsoft’s new Common Data Model (CDM) unifies data across all the Dynamics 365 business applications (including Sales, Customer Service, Financial and Operations), and even introduces entities based on Office 365 data.

With the tools of PowerApps and Flow, Microsoft is promising the ability to build apps and forms without being a professional developer. “If you know PowerPoint and Excel, you can build a native mobile app on any Android, IoS or Windows device,” said Guthrie.

Existing Dynamics CRM Online and Dynamics AX7 installs will be able to automatically update to Dynamics 365 “Without changing a thing. The existing functionality works,” promises Guthrie.

It appeared to – although, truth to tell, the number of screens was dizzying. The application is intuitive, with all things in-line and native; but on the surface, it appears as large and complex as any ERP application. Think of it as Windows 10. However intuitive its user experience – which was designed with input from actual users – a good many users will likely stumble around Dynamics 365 and wish for Excel and Power BI.

Dynamics NAV and GP users can continue to run on-premise, but can take advantage of Dynamics 365 Financials (for example) with the migration tools that Microsoft expects to release shortly.

So Dynamics 365 can be dizzying in both function and business possibilities, but, these real-life cases demonstrated that this is a product more than ready for GA.

“There are opportunities for all of us in this room to drive digital transformation and have enormous impact on organizations,” Guthrie concluded. “There’s been no better time to be a Dynamics customer.”

Dann Anthony Maurno is a seasoned business journalist who began his career as International Marketing Manager with Lilly Software, then moved on as a freelancer to write for such prestigious clients as CFO Magazine; Compliance Week;Manufacturing Business Technology; Decision Resources, Inc.; The Economist Intelligence Unit; and corporate clients such as Iron Mountain, Microsoft and SAP. He is the co-author of Thin Air: How Wireless Technology Supports Lean Initiatives(CRC/Productivity Press, 2010).

Dann can be reached at dmaurno@guidepointmedia.com