While valuations for some of the names in the space have arguably gotten stretched, the trends that have helped the shares of many enterprise software firms shoot higher still appear to have a lot of momentum behind them. Chief among them:

Here’s a look at the numbers posted by five major enterprise software firms since mid-July.

Microsoft (MSFT – Get Report)  beat June quarter estimates on the back of 17% annual revenue growth, and issued mostly above-consensus September quarter sales guidance. The rapid growth of Microsoft’s Azure cloud services platform helped out, but so did the strength of several software franchises. 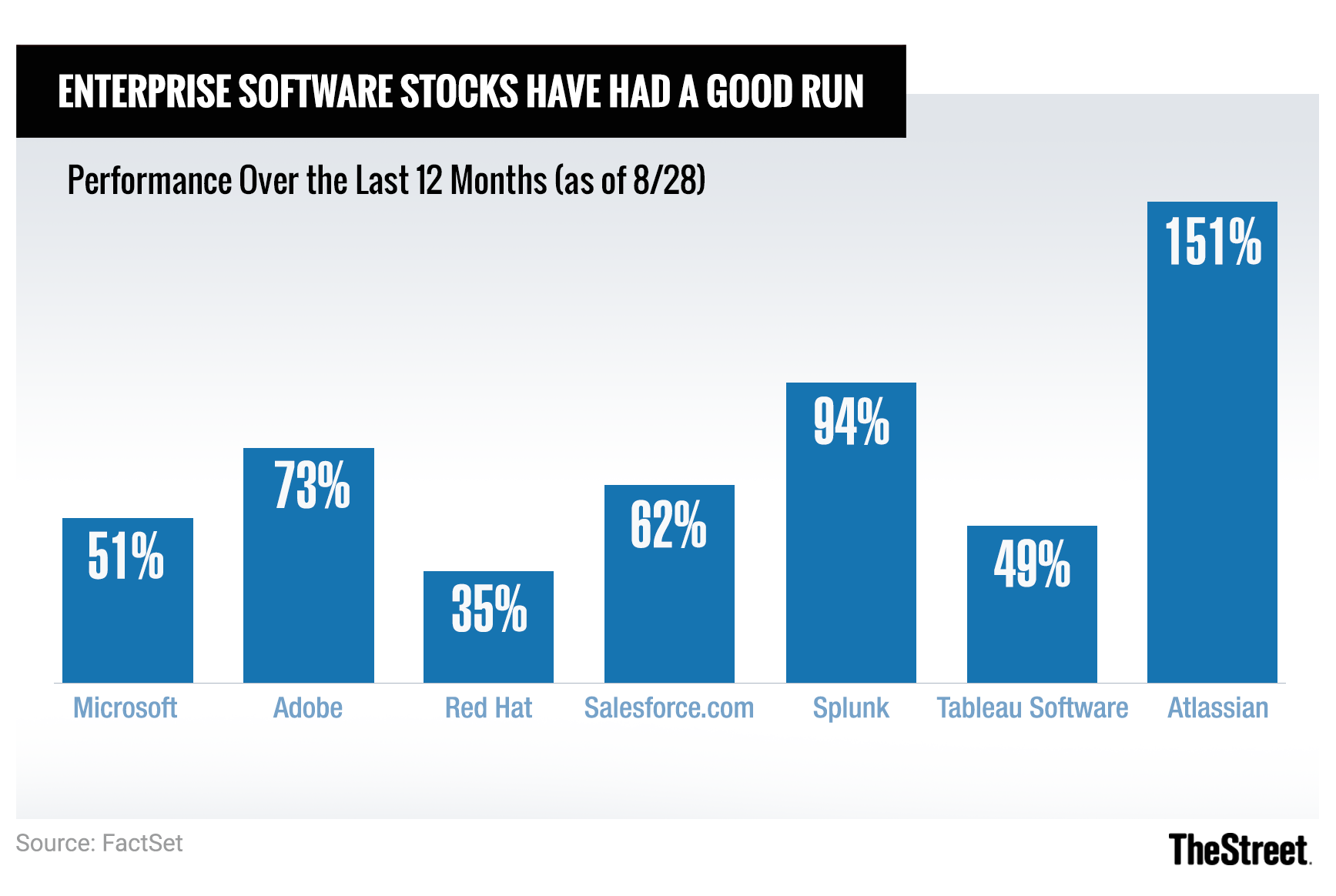 Office 365 demand helped Microsoft’s Office commercial revenue rise 10%, while demand for the Dynamics 365 cloud business app suite helped Dynamics app revenue rise 11%. Both of those growth rates were slower than what was seen in the March quarter, something that Microsoft attributed to an accelerated shift towards Office and Dynamics 365 subscriptions from traditional licenses. The company forecasts double-digit sales growth for its Productivity & Business Processes segment, which covers Office, Dynamics and LinkedIn, for fiscal 2019 (ends in June 2019).

Salesoforce.com and Microsoft are holdings in Jim Cramer’s Action Alerts PLUS member club. Want to be alerted before Jim Cramer buys or sells CRM or MSFT? Learn more now.

The German software giant slightly missed Q2 EPS estimates, but beat revenue estimates while reporting 4% annual sales growth on a euro basis and 10% growth on a constant currency (CC) basis. It also slightly hiked its full-year revenue guidance, forecasting total revenue will rise 6% to 7.5% in CC and cloud and software revenue 7.5% to 8.5%.

DynamicsFocus, LLC. is the leading recruiting source for experienced Microsoft Dynamics, NetSuite and Salesforce professionals throughout North America, click here to learn why

VMware, which has made a flurry of announcements this week at its annual VMworld conference, continues seeing strong growth for its vSAN storage virtualization platform and its NSX networking virtualization platform — vSAN and NSX license bookings respectively rose 40% and 70% annually last quarter. And though VMware’s mainstay server virtualization business remains pressured by tough competition and cloud infrastructure adoption, it managed to see moderate bookings growth last quarter with the help of partnerships with Amazon Web Services (AWS) and other cloud service providers.

Splunk’s (SPLK – Get Report) license revenue, which drives future maintenance revenue, rose 36% last quarter and easily beat estimates. And though it was only about 10% of total sales, the firm’s cloud subscription revenue rose 90%. Driving much of this growth: The use of Splunk’s analytics and management tools, which were once primarily used to monitor the health of a firm’s IT infrastructure, for a broader set of use cases that include security, fraud-detection and IoT device analytics.

Much like Microsoft and Adobe ( ADBE – Get Report) , Autodesk’s ( ADSK – Get Report)  revenue shift from licenses to subscriptions has gone pretty well. Subscription revenue more than doubled last quarter to $420.6 million (over two-thirds of all revenue), easily offsetting a large drop in traditional maintenance revenue. Total subscriptions grew by 119,000 sequentially to 3.94 million, and Autodesk is guiding for 500,000 to 550,000 net subscription adds for the whole of fiscal 2019.