“Microsoft Monday” is a weekly column that focuses on all things Microsoft. This week “Microsoft Monday” features news about the new Xbox Skill for Alexa and Cortana, a new monthly charge for Windows 7 extended support, Skype’s new call recording feature, an Outlook redesign and much more! 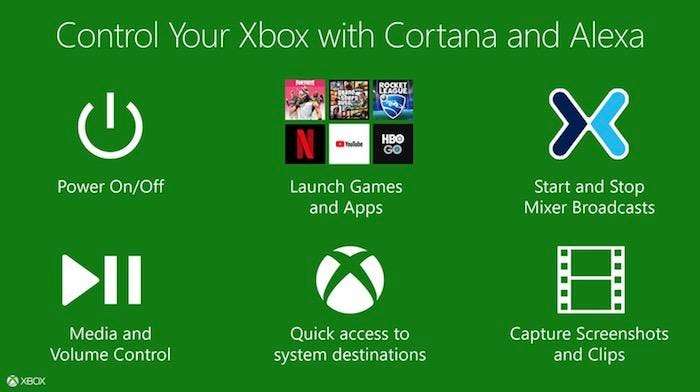 Last week, Microsoft announced that it launched an Xbox Skill — which works with both Alexa and Cortana. This allows users to control their Xbox One using voice commands.

“With the Xbox Skill, you can use voice commands to power your Xbox One console, adjust volume, launch games and apps, start and stop broadcasts on Mixer, capture screenshots, and more,” wrote Harrison Hoffman, a senior program manager of Microsoft’s Xbox team. “It’s the fastest way to get into your games and one of the easiest ways to interact with your console for everyday tasks. For example, if you have the skill enabled on your Echo and you’re a part of the Insider preview, just say ‘Alexa, start Rocket League.’ and this command will automatically turn on your console, sign you in, and launch your game.”

You can also say “Ask Xbox what can I say?” to find out what other commands are supported.

The Xbox Skill is being rolled out to Xbox Inside rings gradually. If you notice the Digital Assistant setting is visible under Settings > Devices, then that means you are eligible for testing the Xbox Skill. And if you do not see it yet, then you will have to wait until Microsoft adds more Insider rings to the beta.

“We are announcing that we will offer paid Windows 7 Extended Security Updates (ESU) through January 2023. The Windows 7 ESU will be sold on a per-device basis and the price will increase each year,” wrote Microsoft’s Corporate Vice President for Office and Windows Marketing Jared Spataro. “Windows 7 ESUs will be available to all Windows 7 Professional and Windows 7 Enterprise customers in Volume Licensing, with a discount to customers with Windows software assurance, Windows 10 Enterprise or Windows 10 Education subscriptions.”

The monthly price for the Windows 7 ESU was not listed as of yet. Microsoft could have potentially ended support on January 14, 2020, but this is a way of enabling organizations to extend the use of Windows 7 as their primary operating systems for their machines rather than being forced to upgrade to Windows 10. 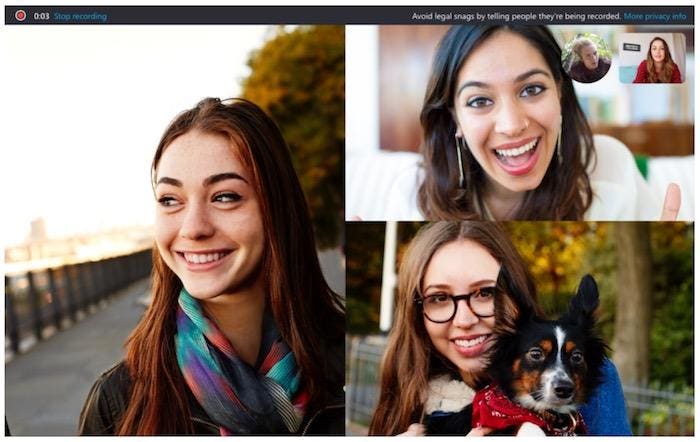 In a blog post, Skype has announced Skype call recording. The call recording feature is available on most platforms except Windows 10. But Skype said that the feature will be added to Windows 10 in the coming weeks.

“As soon as you start recording, everyone in the call is notified that the call is being recorded—so there are no surprises. If you are on a video call, Skype will record everyone’s video as well as any screens shared during the call. After the call, you can save and share the recorded call for the next 30 days,” said Skype in the announcement.

On mobile devices and desktops, a banner will appear on the Skype screen that allows everyone to know that the recording has started. After the call is finished, it will finalize and then post to your chat where it will be available for 30 days. 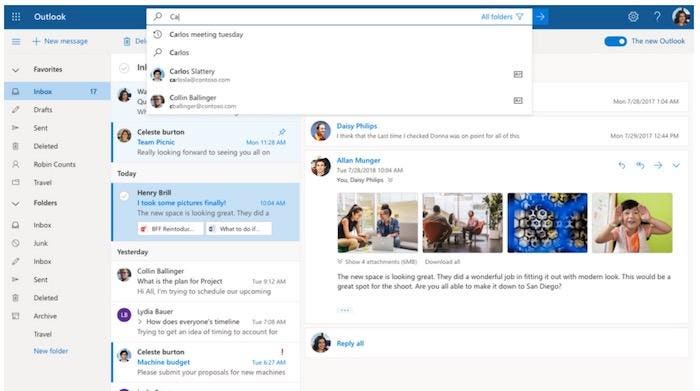 – Faster Search – Outlook will be able to try to predict what you are searching for based on recent conversations and the people whom you interact with often. 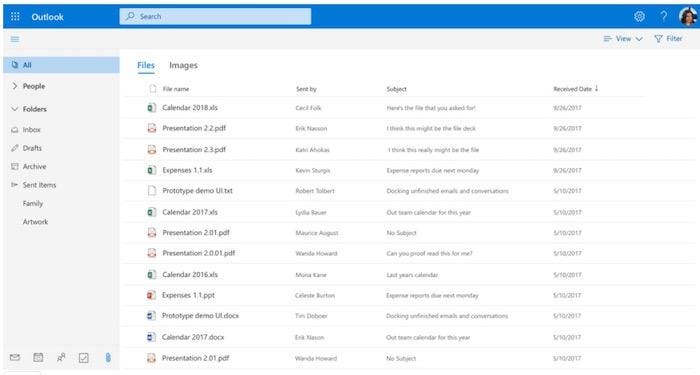 – Easier File Management – Microsoft has made it easier to find a file in your inbox with a new Files module that shows all the files that you have received or sent in your inbox. 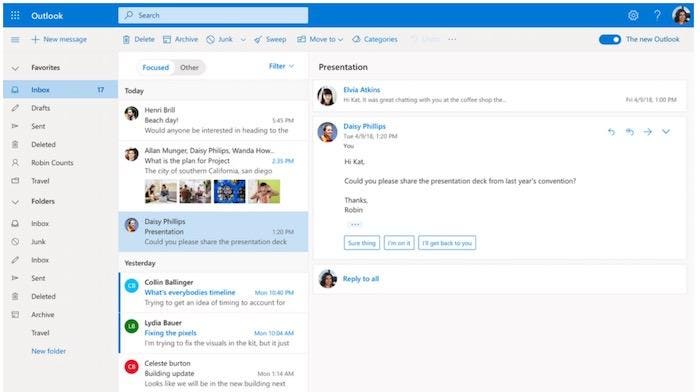 – Suggested Replies – There is a new tool that shows you suggested replies so that you can quickly respond to emails as they come in. This feature looks very similar to the one you may have noticed in LinkedIn’s messaging feature. 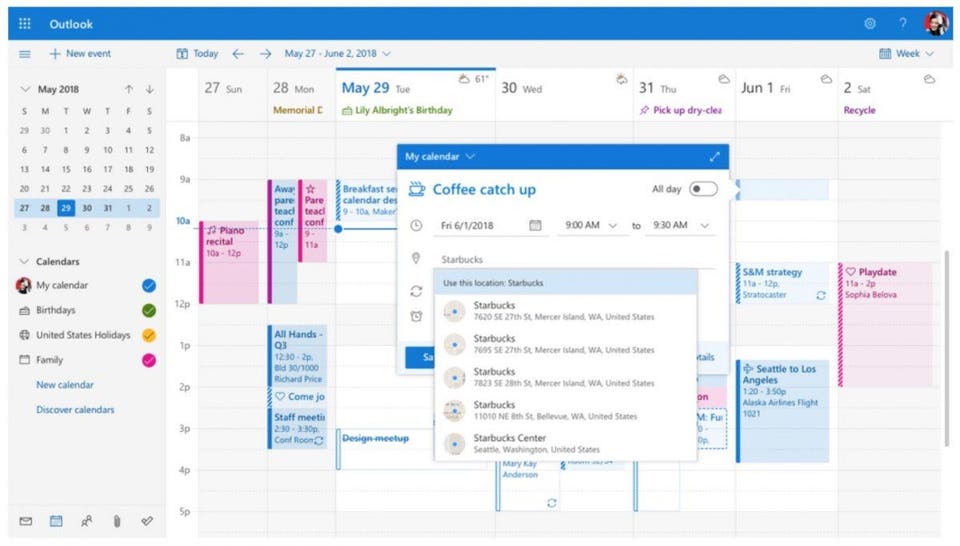 – Simpler Event Creation – When you add events to the calendar, you will see updated event icons and location suggestions to get the address details. 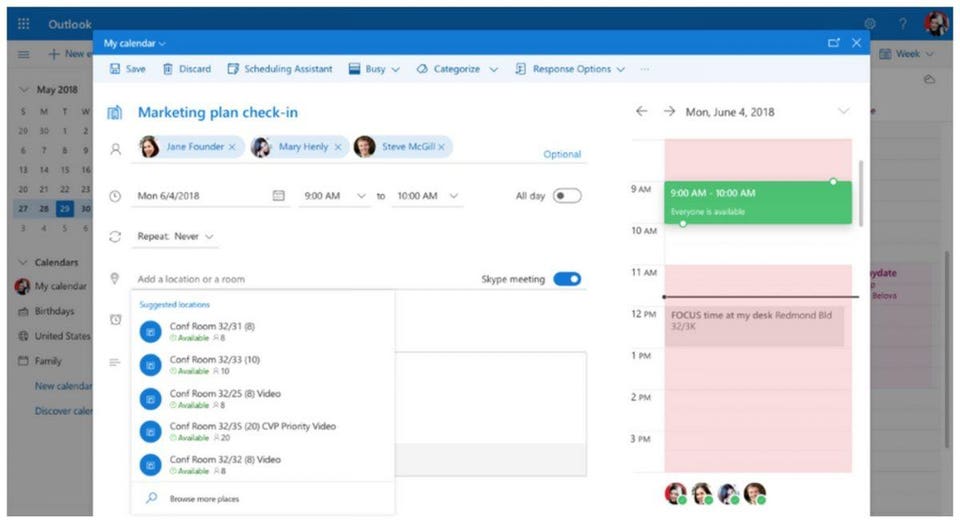 Outlook – Room suggestionsMicrosoft
Smarter Room Suggestions – Using artificial intelligence, the new version of Outlook will help users find the best rooms for meetings based on the time, the number of attendees and availability.

Plus the Outlook team also simplified the add-on experience by giving you more control. If you were using add-ins in the classic version of Outlook, then they will appear pinned next to mail actions in the drop-down menu.

Microsoft also improved existing features like faster and simpler group creation, efficient group email triage and richer group cards. And you can also add folders, people and categories to your favorites so that it easier to pull up. With the new version of Outlook, group cards can now be used from inside the app to view membership information.

Microsoft has invested in Sarcos’ $30 million Series B round. This round of funding was led by DIG Investment and Alex. Brown. Based in Salt Lake City, Sarcos spun out from Raytheon in 2015. Sarcos was originally founded in 1983 and got bought out by Raytheon twenty-four years later.

Along with Microsoft, existing investors that also joined this round include Caterpillar Ventures, Cottonwood Technology Fund, GE Ventures, Schlumberger and Sarcos’ chairman and CEO Ben Wolff.

Sarcos is known for making robotic systems like exoskeletons for the military and industrial sector. The company saw its workforce double in the past year. This round of funding will be used to hire additional talent and expand the production and deployment of its Guardian S mobile IoT inspection. Plus the funding will enable the company to further push commercial versions of its full-body industrial exoskeleton Guardian XO product line next year. 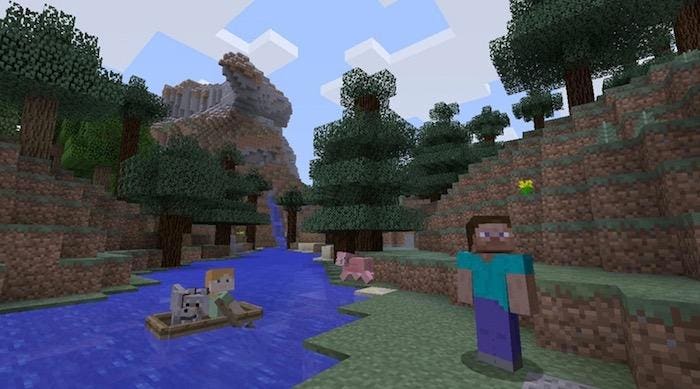 The Minecraft Starter Collection is $29.99, which includes the main Minecraft game and 700 Minecoins so you can buy additional skills, textures, mashups, etc.

New Surface Expected To Be Announced On October 2nd

A couple of months ago, Microsoft also revealed the more affordable 10-inch $399 Surface Go and now it seems the Redmond giant has a few more tricks up its sleeve. Microsoft has sent out media invitations to an event in New York City on October 2nd at 4PM ET that says: “A moment of your time.”

It is believed that Microsoft will announce a new line of Surface Pro and Surface Laptop devices during the event. Plus Microsoft will likely make a number of software announcements as well.

There were rumors that Microsoft was going to introduce a dual-screen device code-named Andromeda, but that will likely get pushed until next year. It has been a couple of years since Microsoft launched the Surface Studio so there is a chance that a successor could be announced at the event. 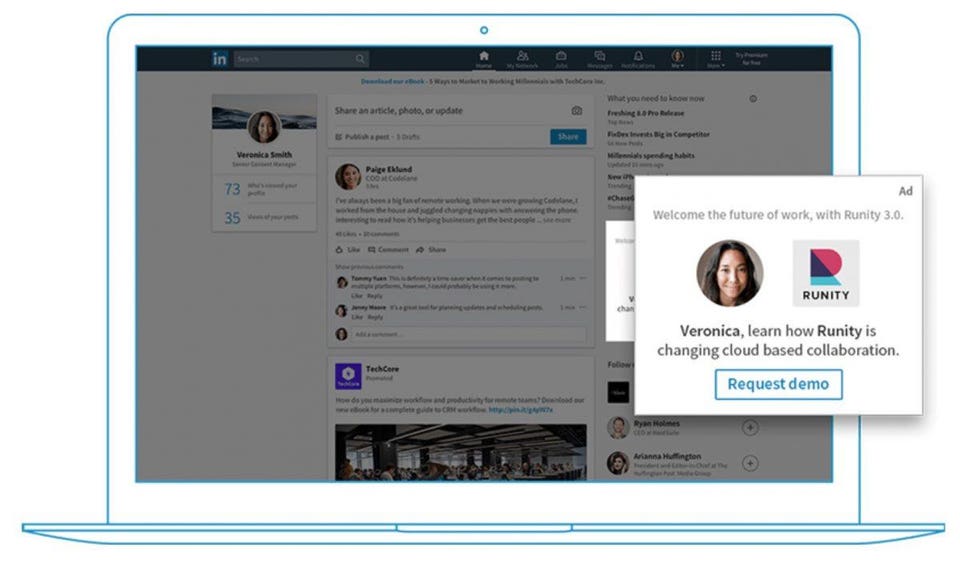 Today LinkedIn announced a new Dynamic Ads tool, which is implemented directly in Campaign Manager and it is rolling out in the next week. This makes it easier for users to send personalized ads to their target audiences across LinkedIn’s desktop version.

“Dynamic Ads help you build deeper relationships with your audience by automatically customizing your ad creative with the publicly available information from LinkedIn member profiles. With this added visibility and scale, you can create more memorable experiences with the people that matter most to your business,” said LinkedIn’s Ayusman Sarangi. “LinkedIn Marketing Solutions has now made all key formats available via self service, making it easy for all online marketers — regardless of size — to leverage LinkedIn’s advertising tools, so they can achieve their marketing goals. Dynamic Ads is the final native ad unit to become available on a self service basis.”

Procore Technologies and Vistage have set up campaigns with Dynamic Ads to feature their products. And LinkedIn Dynamics Ads saw a 2X click-through rate compared to traditional display ads. One of the biggest reasons why Dynamic Ads stand out is because they are personalized with the profile information of the user such as their photos, names, companies, and job titles.